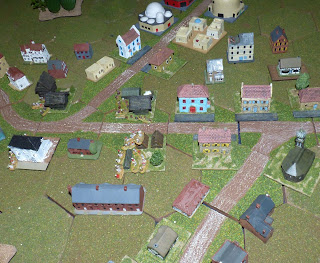 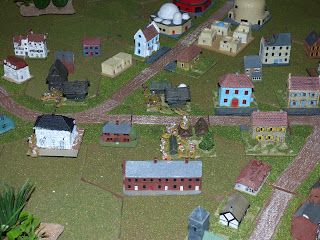 This was a fun little campaign. The rules required a certain amount of interpretation and sportsmanship on the part of the players, but that suited us nicely. Hellfire itself is a pretty good set of rules. The combat calculations felt a bit clunky at the start but we soon got to grips with them and I'm sure that the mental arithmetic has rejuvenated our ageing brains a little bit. The only problem with the rules is that they don't quite play quickly enough to fit the time available to us, but that won't stop us playing them again when we have more time.
Posted by Ruaridh at 13:14 No comments:

Turning the Flank at Reval: The Battle of Steppe Trails

The Estonian campaign must come to a conclusion at some point. Either the Freikorps juggernaut would run out of steam or the Estonian nation would have been bled white. That conclusion was to happen at Steppe Trails. There could be no other conclusion this day. The winner of this battle would hold the laurels and the loser would be consigned to the dustbin of history.

The ground at Steppe Trails comprised a small number of tiny wooded areas, little more than copses, and several low hills. There were no good defensive positions to hide in, so the Freikorps plan was to drive forward as fast and hard as they could in an attempt to push the tiny defending force from its positions before reinforcements could arrive. 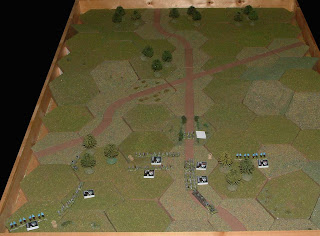 They marched hard up the road (Freikorps movements shown by red arrows and Estonians by blue) towards the probable hiding places of the enemy and had soon reached them. An Estonian tank and armoured car showed themselves and promptly routed a company of Freikorps Uhlans. 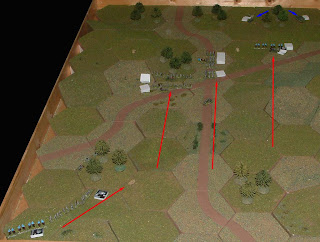 At about the same time as the Freikorps armoured car spotted Estonian cavalry in the ambush at that north end of the battlefield, Estonian reinforcements arrived at the south-west, routing the second company of Uhlans and breaking a Landswehr company. Fortunately the machine-guns in the woods caused some casualties to the advancing Estonians. The Freikorps commander quickly sought to redeploy his troops in the centre. 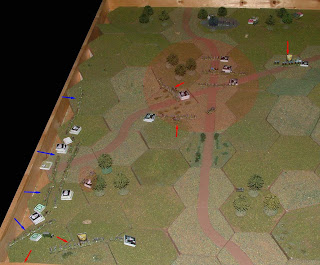 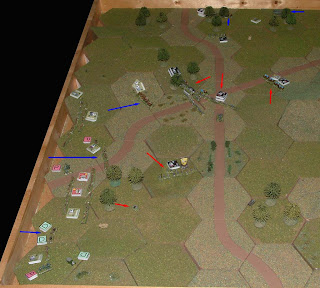 Despite their losses, the Freikorps sought to take the fight to the Estonians and continued to advance into the fire. One big push was all that was needed to carry the day. 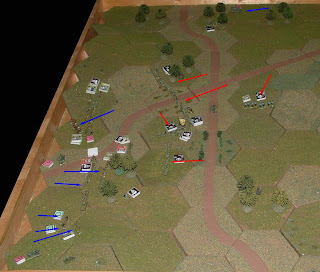 Unfortunately, pluck and courage count for nothing against bullets. With all of their Colonels dead and casualties mounting Freikorps nerve failed. Half their army was dead or routed and the rest of the Freikorps took to flight. Miles from home, tired and hungry it was all too much for them. 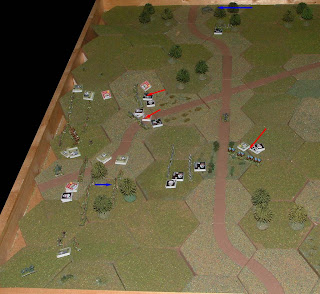 This game was characterised by some early good rolling on the part of the Estonians that saw a couple of Freikorps companies routed, while the Freikorps never quite managed to get the Estonians to rout once the reinforcements had arrived. They piled on the terror markers but not quickly enough. Had they done so, then the Estonians would have routed straight off the battlefield and the Freikorps job would have been easier. As it stood, they took slow and steady losses throughout and then failed their flight test the first time they had to take it. In the battle, the Freikorps lost 4 Colonels and 1 Captain to enemy fire, which seemed quite remarkable to us, not ever having seen many officers killed in battle. Still, it was an epic battle with an epic conclusion. The Freikorps fought gallantly throughout but the Estonians won the battle that really mattered and won the campaign as a result.
Posted by Ruaridh at 12:01 No comments:

Email ThisBlogThis!Share to TwitterShare to FacebookShare to Pinterest
Labels: Red Actions, Turning the Flank at Reval

Turning the Flank at Reval: We Are Men of Desperation. And Desperate Men Scrap Until They Are Dead or Win.

Soldiers!
This is the last hour. And this is judgement day.
We have fought backwards grimly, trading space for time, boxing the Hun’s square ears round both sides of his square head, and whittling him away. But now there is nothing left to men of desperation but to fight and to win.
We are men of desperation. And desperate men scrap until they are dead or win.
I need not paint too black the picture that sits before us. The enemy stands upon the precipice- if he falls forwards, he falls on our women and children and our country burns in the black fire of pillage and foreign conquest. If he falls backwards, he falls into the blacker smoke and wrack and ruin of his own fall, and he will lie on his belly and eat the dust of the earth, a ruin among armies and a marvel among the nations. It falls to us to see he falls backwards.
All his victories have lain neither in muscle nor in spirit nor in strategy, but in numbers and mechanised might. And through good fortune and good fighting, we now wield the mechanised might he left by the mountain track. Now every advantage he has ever held of brook, of tree, of motor-car and cannon-gun, sits with us, at the edge of the world and the judgement of the earth.
And we will make him pay.
Posted by Ruaridh at 12:00 No comments: