Crikey, I found the enthusiasm to do some painting this last week and a bit! After all my talk of ennui and an 18 month dry spell with no painting, I finally got it together to do some. Two things have grabbed my attention recently. One is my 15mm sci-fi terrain. I still can't bring myself to paint actual 15mm figures, but I did slop some paint on some of my Mad Mecha Guy buildings and print out posters for the MMG billboards. There's a lot more I could and want to do to enhance these buildings, but I'm just happy to have more of them coloured in right now. Once the rest are done, I shall go back and add graffiti, signs and other bits and pieces to improve the look. 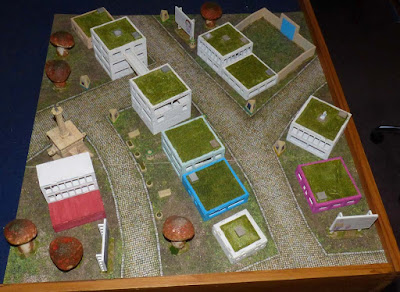 Ages ago, I bought the pdf of Dave Graffam's Cobblestone Streets battle mat. It comes as a pdf including a file breaking the map up into A4 sheets for printing. I started printing it out and mounting each sheet separately on mountboard. They are not geomorphic so I am stuck with the standard layout, but that is fine. The advantage of printing this way is that I can easily stack the tiles, stick them in a box file and store them away. I can also lay out only those tiles I need.

My sci-fi faction is the Bwendi, a former African republic that models itself on a caricature of the British Empire. It's mortal enemy is the nation of Albion, descendants of the English whose warped perception of what it means to be English means that there can never be peace between Bwendi (the righteous guardians of fair play and cricket) and (perfidious) Albion. As part of that, I started wondering of Bwendi might not seek to make their towns more Olde Englishe. What better way to do that than to have cobbled streets? So, the Dave Graffam battle mat may well be used as the base for a Bwendi town. The cobbles are unlikely to have much effect on game play with all the grav vehicles kicking around, and they look nice, according to President for life Colonel Throckmorton P. Gladiolus XLVI. I hear that Gladcorp is planning to introduce fog generators in some city centres for a more authentic experience too.

The battle mat is sized for 28mm figures but I have printed it out at 100% and it seems ok for my 15mm figures. The roads are no wider than 100mm which is pretty much what I want, but they lack pavements. I'm undecided about this. Many places I have visited have limited or no pavements, so perhaps this works ok, especially with the perspective that Bwendi is a (darkly humorous) banana republic on a distant colony world, but maybe I need to make some pavements to put around the buildings. I must think on this.

Musings aside, I am really quite happy with the visual effect of the buildings on the Dave Graffam mat. I've been dithering for ages about what sort of base mat to use with the Bwendi stuff, and have printed up a bunch of roads from WWG's Streets of Mayhem set that I have used previously to form towns, but I think the olde worlde aesthetic may well work better for my vision of the Bwendi. We can leave the future, urban dystopia for Albion. After all, they do it so much better. 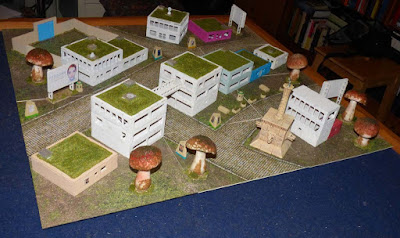 The other thing that has grabbed my attention recently is my ongoing 6mm WW2 Western Desert project. This project has been ongoing since Miniature Wargames published an orbat and campaign for Operation Brevity in the 90s. I painted up that orbat but became obsessed with checking it against the sources, and quickly realised that it was only a very rough approximation of what was actually present on the field of battle. That led to analysis paralysis and the project stalled. Since getting the Benghazi Handicap sourcebook for Command Decision: Test of Battle, I have been more enthused, but not enough to pick up a brush until this weekend. Once I have some of it completed, I shall start posting photos of that too.
Posted by Ruaridh at 10:51