Broneslav strode over to the door of the storage room and listened at it. His exceptional hearing picked out nothing on the other side. He eased the door open and peeked through. The corridor beyond was dark, lit only by his own torch. He stepped through and followed it a short way to a T-junction. To his left, the light of his torch glittered off an 8' tall statue of a winged child with two snakes twined around its body. In one hand, the statue held a wand, while the other had been carved holding a few coins. Broneslav noticed that the wand was shinier than the rest of the statue, suggesting that it was touched or polished by whoever lived here. He wondered who this statue was meant to represent.

To his right, Broneslav could see that the the short corridor ended in a door. Beside the door was a button with a squiggly symbol carved above it. The young warrior thought quickly. The door was the obvious way out, but the statue showed signs of use. He would check it first before leaving via the door.

With quick, panther-like strides Broneslav approached the statue and studied it. The wand was the obvious part to check. It had clearly been handled more than any other part, so he checked it carefully. On looking closely at it, Broneslav could see that it was hinged at the wrist of the statue, indicating that it could possibly be turned both sunwise and widdershins. The question was: which way? Looking more closely, he could see no clues, so he was just going to have to try and see. Sunwise was usually lucky, so he took hold and pulled. The wand moved easily. 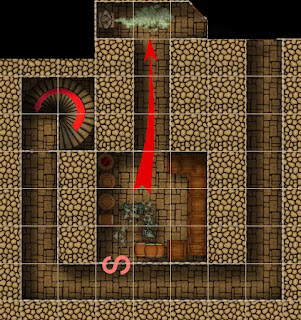 Suddenly clouds of choking gas started pouring out of the statue's mouth. Broneslav sprinted back away from the statue and towards the storeroom. He held his breath as he did so, and only breathed out when the door was safely shut behind him. Panting, he sat on the floor with his back to the door and collected his thoughts. Should he wait and see if the gas cleared? His one brief breath of it had left him choking, so going in while it was still there was not really an option. That said, he could try holding his breath long enough to get to the door he had seen, but he had not idea what was on the other side. That could leave him both fighting for his life and out of breath. The final option was to return through the secret door and see where the corridor led.

Broneslav decided to wait (the first option scored higher on a die roll than the other two by enough to make it a clear choice despite the danger). He needed a rest anyway, so waiting was less of an issue, and it would probably be good to grab food and a drink while he was in a room replete with both. He blocked both the doors with crates and settled down to a good meal of what appeared to be dried mushrooms and some other preserved vegetable matter. The wine helped a lot though. That was a decent drink, although it too carried a slightly strange aftertaste.