3 Yarthmont - Lurking in the shadows

With the zombies dead, Broneslav only had one direction to head in, and all the corridors on his map pointed there now.

The first room he checked contained a white ivory coffin. The walls were painted with scenes from court life, focusing on the life of the ladies-in-waiting at the queen's court. The coffin was empty and the room contained nothing else.

From there he headed towards the centre of the pyramid where he found a preparation room for corpses. Suddenly, a black presence loomed out of the edge of the torchlight. Broneslav ducked back, but not quite fast enough as one of the creatures grazed him (1 DAM, -1 STR) and an Arctic chill coursed through his body. He swung his sword in return and grazed it with the first stroke then sliced it in two with the second. It dissolved as if it had never existed. Furiously fending off the others, he still took another cut to the arm and the chill in his body increased (1 DAM, -1 STR). With the adrenalin boost brought on by this latest cut, he sliced furiously at the remaining shadows and two more dissolved under his onslaught. Even with only two left, he was hit again (1 DAM, -1 STR), but now the odds were more in his favour and he more easily dissolved one more. One on one, Broneslav more easily defended himself and was quickly able to bring the fight to a close with a quick slash and stab that saw the last of the shadows dissolve as if it had never existed. Breathing hard and feeling weak, he shut the door behind him and rested against it so that nothing more could come in and surprise him.

After a little while, he had recovered his breath, although he still felt weak from the shadows' attacks. He searched the room, finding a sack of silver coins and a glass vial containing a silvery potion. 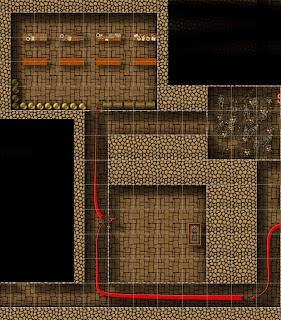 Feeling battered and bruised, even Broneslav's optimism and teenage self-confidence could not fail to conclude that he needed to rest up before continuing. He made his way back to the Magi, ducking into an empty room when a small party of baboons appeared in the corridor. Once they had gone, he reached the Magi without trouble.