The Magi healed Broneslav, and let him rest fully before returning to the lower tier. They even identified the potion he had found as a Potion of Invisibility, all in the name of helping him to help them defeat their rivals and the evil Zargon.

Broneslav returned quickly to the corridor near the embalming room and continued onwards. The next room he came to had a two foot wide hole chewed through the door. Teeth marks were clearly evident. He decided to leave well enough alone and continue down the corridor. Suddenly three giant shrews leapt out of the hole in the door and assaulted Broneslav. The frenzied assault left Broneslav with a bite on his leg (1 DAM), but he slew a shrew in return despite the welling fear that left an iron taste in his mouth. He then fended off further assaults from the two remaining shrews, managing to kill both of them quite quickly.

Figuring that this meant the room was now safe, he entered and found scenes of a man giving advice to kings and queens painted on the walls. The coffin in the centre of the room had been gnawed to pieces and nothing remained of the body within. He left. He had only one more corridor to search, based on his map, and this was where the X was. 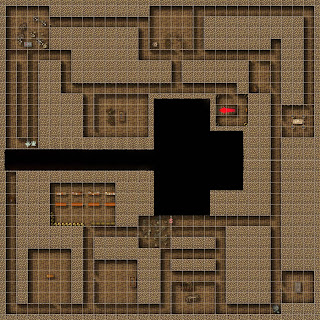 The X proved to be the site of a trapdoor. Seeing nothing else to take his interest and now route to the centre of the pyramid, he opened the trapdoor and began to climb down.

Despite his tracking skill and sharp eyes, Broneslav has managed to fail to spot the two secret doors to the centre of the pyramid where the big treasure lies. This area was not detailed on his map, so he is unaware of what he is missing out on. Ah well, such is the life of the murder hobo.