When Broneslav announced himself at the Watch, the Tribune was relatively quick to see him. She took charge of the additional evidence that he had brought with him and listened to his story. It was clear that she was taking this seriously.

"So," began Broneslav, "I think we have a conspiracy to frame my relative for the death of Lucia Vorloi. I'm not sure why they were burying her in the basement though. That bit does not make sense to me. This group, The Veiled Society, wishes to stir up trouble for some reason and thinks that embroiling the Torenescu's in a feud with the Vorloi's will help achieve that end. All this digging tunnels just seems weird though. I don't get that." 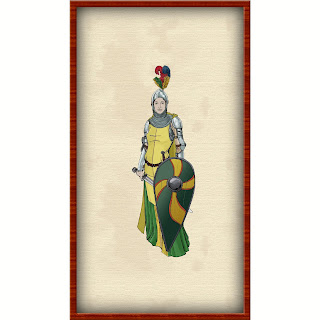 "Yes," confirmed the Tribune, "That is what we have learnt from the man you caught, and the prisoners you rescued confirmed it too once we checked with them. We need to investigate this because it seems like a threat to the Grand Duchy and we cannot allow that. I can tell you that the man you captured is a dock worker, who was hired to kill Lucia Vorloi, but that he claims to have little idea of who hired him or why. It was just a job to earn some easy money as far as he was concerned. Thank you for your efforts. If you come across anything new, please report it. In the meantime, do try to stay out of trouble."

Connecting the dots, Broneslav now understood why there was pitch on the ladder and that also explained the connection to the wine he had found in Turano's guesthouse. His knowledge of trade in the city told him that it was sold only to a few waterfront taverns. With any luck, he might find the other man in one of those taverns, and that might be a lead to the bosses behind this murder. As someone without an official warrant, he reckoned he might pass for a civilian and mostly harmless, where the watch would just put others' backs up simply by being there. Time for a drink.