Once more the perfidious aggressors from Albion have tried to invade Bwendi and been thrown back by the heroic Bwendi people. Their technology is truly no match for our spirit and elan. Thus spake Throckmorton P. Gladiolus, President for Life, at a press conference late yesterday following the startling news of a new Albion incursion onto Bwendi. The Albion invaders had landed in the back country of Bwendi near a vital industrial facility that produced much-needed fertiliser for the stout Bwendi yeoman farmers. The Bwendi Fast Response Team had reacted quickly (well, obviously!) to deal with the threat and had rapidly neutralised it. This is the story of that heroic action.
We played FutureWarCommander last night. It was my second game ever and Steve had not even read the rule book, so it was all down to me. I had played one game previously against Steve Kelly, who had played before so I had some grounding in the game but not much. At least I had read the rules though. That did help a bit. Nevertheless, I am sure that when I re-read the rules I shall find plenty of things that I got wrong.
The scenario was a simple 2000 point encounter battle. I had two troops of Thor MBTs, each with one Smart Missile carrier to provide heavy fire support, and one platoon of infantry in IFVs (Breakpoint 7). Steve had three troops of armour and two platoons of infantry, one of which was in APCs (Breakpoint 12). The game began with me taking the first turn.
The leader of the FaRTs looked at the oncoming enemy armour and ordered his tank commander to engage it at long range. There were a lot of guns heading their way and the FaRTs looked a little thin on the ground. His radio hissed and squealed as he spoke into the microphone and he watched as the entire armoured column advanced at full speed before suddenly stopping without even firing at the enemy. Fire was coming in thick and fast but the FaRT tankies were happily just motoring along. What the heck? Then he ordered the infantry forward to the small township of Gladioli ahead of them. The radio hissed and squealed some more and then it went dead. The IFVs stood stock still. Meanwhile the ADF commander was making the most of things and firing for all he was worth. Very soon three FaRT tanks were in flames and others were buttoned up and hoping for the best. Confusion reigned among the FaRTs and there was no doubt that their CO would be raising a stink about this if any of them survived. Things improved marginally as the missile tanks began to engage the enemy and smoked two of the enemy in return. The IFVs engaged an APC heading for the town, leaving it a blazing wreck too. "Well," thought Colonel Neryngia, "at least we are giving a reasonable account of ourselves."
(Click the pictures for larger versions) 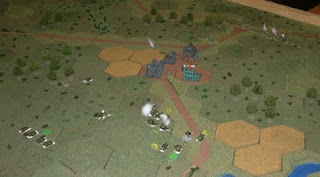 Turns 1 to 3 passed very quickly in a welter of command blunders and failed command rolls for the FaRTS, while the ADF used the opportunity to engage and destroy a bunch of FaRT tanks. The FaRT HQ blundered with his first two command rolls, while the FaRT CO just failed the first three completely and my troops did nothing except fire using opportunity fire at the enemy. At least that did some damage although I was still losing on points at this time. Every vehicle of mine that was hit in these turns also managed to be suppressed, while none of Steve's were. It looked like the game would be a total walk-over for Steve.
After performing some percussive maintenance on his radio, Colonel Neryngia was finally able to talk to his troops properly. An ADF recce vehicle had taken up station in the woods near his command post so he ordered his infantry to assault the woods and clear them. This they did very easily before mounting up again and heading towards Gladioli. Enemy infantry had been sighted within the town and his men would have to clear it. The enemy armour was now advancing on the FaRT tanks though and another of his precious Thor MBTs was in flames. Things were really not looking good and it looked worse when one of the IFVs was hit as it tried to flank enemy positions within the town. Fortunately the infantry inside were able to dismount in time and survived. The rest of the infantry pushed into the town and assaulted the enemy troops there, only to find that they were power-armoured and pretty tough. The men retreated back through the town. At least Colonel Neryngia's radio was working properly now. 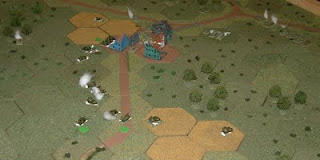 Turns 4 to 6 were much better from my perspective. My armour still spent most of its time suppressed, but at least my troops were able to do stuff as I passed a couple of command rolls. The ADF meanwhile was still pressing on and getting their command rolls just fine.
Then the battle really started to improve. Seeing the casualties caused by assaulting in the town, Colonel Neryngia ordered his men to just lay down as much fire as possible against the enemy. They would drive them out by superior firepower. The IFVs and the infantry concentrated their fire against one enemy position after another. Very soon they had cleared large areas of the town for only a few casualties. The armour was starting to get the range too. Several more enemy tanks went up in smoke. As night fell, the enemy withdrew in good order. The FaRTs held the field. 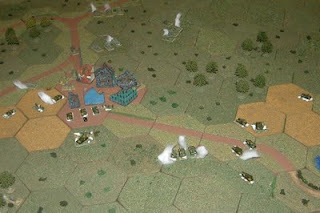 Neither of us reached our breakpoint by the end of the game. My force had taken 6 casualties in total and was one point away from breaking. Steve's force had taken 8 or 9 casualties and was further from its breakpoint than mine. We totted up the casualties. I had amazingly caused more damage than Steve had so I won a minor victory, which the Bwendi press wrote up as a stunning defeat for the ADF.
All in all it was a good game despite lack of familiarity with the rules. We played it straight and removed hits at the end of each turn. There is an option for retaining hits. Had we done that, I would have had no armour by the end of Turn 3 and the game would have been over much more quickly. Steve would have taken more casualties too, but not nearly as many as I would have done. My main problem was that most of my armour spent about half the game suppressed and unable to do anything except fire in opportunity fire. One it got moving though, it was able to do a bit of damage. The command system is really good fun in FWC. It is frustrating that you are not guaranteed at least one action per turn, but it also offers the opportunity for some really good bouts of action. At the end of the game, in the final turn, I managed to make loads of command rolls with my infantry and we were able to clear a large chunk of the town as a result.
Posted by Ruaridh at 11:12