I've played a couple of dozen games of Warfighter now, both on VASSAL and physically. So, it's time to follow up my previous reports with a few more thoughts. These are based on the content of the VASSAL module which you can buy direct from DVG and on the core module with a few expansions that I bought. 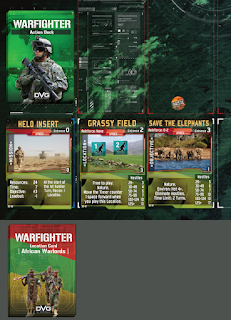 The VASSAL module includes the core game and expansions 1-47. That is a lot of content, but not everything released for the game at the time of writing. I am fairly sure that the additional expansions will be released as mods for the VASSAL module, but I have no idea when that will be.

One issue I found with the VASSAL module was that one of the Eastern European missions had the wrong card image, so I could not play it on VASSAL, because you need to be able to reference those images. I wrote to DVG about whether that mod would be updated but have not heard back. There might be other issues with the cards in the mods but I have not found those yet.

The VASSAL module is good and lets you get started playing with a wide variety of forces for player squads and adversaries. It is consistent in form, so you do not need to worry about differences in cards (more on this in the physical game below) and it includes the rules as part of the VASSAL module as well as two scenario books that set out missions with specific forces and objectives. I have not tried the scenario books, so cannot commment on them.

Using the VASSAL module is simple, so the game is easy to play with no need to spend time digging out the cards and setting up a playing area. As the whole set-up is consistent, whether or not it conforms to the most recent errata or not, there are no issues with sorting out the cards as I discuss for the physical game. My only issue with it is that I could do with a larger monitor than my current 27" one, so I do not have to scroll or zoom to get to different parts of the game board

When I bought the Modern VASSAL module, I also got the WW2 module. I am glad I started with the VASSAL modules. They gave me a good feel for the game at a decent price and showed me that I preferred the Modern version.

The core Modern game comes with US soldiers and equipment, Middle Eastern insurgent and military adversaries, and Jungle Cartel adversaries, plus the appropriate locations, counters, rules, board, one scenario book. This is all entirely playable out of the box. 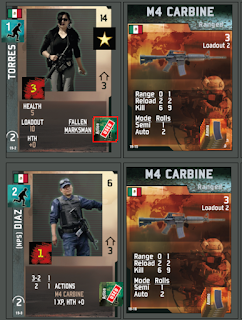 The 4th edition also includes all the latest card updates. These have happened along the way as the game has developed and expanded to the point where there is an upgrade pack containing 360 cards for those with earlier versions of the game. If you are only going to play the 4th edition core game, you don't need the upgrade pack.

The upgrade pack also includes cards for the first nine expansions, which were released before the changes to the game. You simply swap out cards with the same name for those cards in the upgrade pack. It is fairly simple to do this, although it gets confusing because the card numbers are often not the same and there are a lot of questions about just this on the BGG forum, so it is not just me getting confused. Some of these expansions have been upgraded to the new cards, but others have not. When I bought my copies, I found I had a mix of the two. This will depend upon stock at the place you buy the game and when they got it in.

I'm glad I got the upgrade pack because of this, but it is also useful because having duplicate or triplicate cards for the equipment makes it easier to remember who is carrying what.

The issue comes when some of the cards ostensibly depicting the same equipment have been upgraded further. My 4th edition core game came with a MOLLE card that lets my troops carry more stuff, but the cost was more than in the other set this card came in, and I was not sure which was correct. Referencing the VASSAL module, I was given one stat set, but when I checked on the BGG forum, I realised the VASSAL version was out of date. Not a problem when it is consistent within the set, but confusing when putting together various expansions.

Another issue I have found was that the core game is meant to come with two of the MOLLE card but I only received one. I need to contact DVG customer service about this. In the meantime, I have printed out the version of the MOLLE that I am using and have pasted it onto the older version of the card so that my set is consistent.

My final issue to mention here is with the Australian set I bought. You get two copies of the AUG F88 rifle, but each of my two copies had different long range stats on them. I found out which was correct on the BGG group very quickly and also learned that the suppressed version, for which you only get one card, also had the wrong stats. It's a bit frustrating that these errors are present when you pay good money for these things, but I have pasted the correct stats onto the card, so it is not a total loss. I'll be copying and pasting the most up-to-date versions of the stats onto any other cards with similar errors. It's not elegant but it does the job. One other thing I have done is to copy and paste the most commonly used weapons (in my case grenades) onto spare weapons cards, so that I have enough to go around. This is a good way to use the cards that have been removed from the set for being outdated.

It really is a fun game and a lot more interesting than I initially thought when I first read about it. Each game plays out like scenes from a movie and the sorts of tactics that I feel ought to work in real life do work in the game, as long as the dice do not mess things up for you. Playing a series of games with the same soldiers can result in you getting attached to them, and it gets to feel like a role-playing game at times. 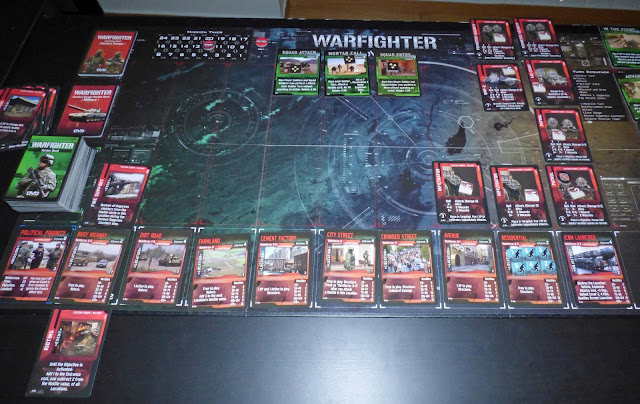 Overall, the physical game wins out despite the slight irritations. I spend all day at work using a computer screen and don't particularly want to stare at one in my downtime too. Shuffling and moving the physical components is also a large part of my preferred gaming experience, and is far superior to clicking and dragging. That said, getting the computer to do the shuffling for you certainly does save on picking up the cards from the floor when I drop them. That happens all too often these days!

The actual physical components feel sturdy and good quality. The downside of the physical game is the footprint on the table. You'll likely use a large part of the typical dining table to get set up, although people do suggest ways of reducing the game's footprints, such as card holders that keep your cards upright.

There are a lot of expansions for the game. You get a large number of them in the VASSAL module and it would cost a fair bit of money to match that in the physical version. That said, you don't need all of them to play. There is a good game to be played right out of the box. I don't see me buying every expansion, simply because not all are of interest, but I could certainly be tempted by a few more, and adversaries packs that control the opposing force are more likely to tempt me than more nations ... well, unless they add the Norwegian army ...

With all this in mind, I very much hope that they get around to the Near Future/Cyberpunk version soon. I would love to use this system to build and run a cyberpunk gang, hacking my way past security and running extremely hostile corporate takeovers.