The Thrappled Lemmings Head To Market (Five Leagues from the Borderland)

Ok, time to try to get to grips with the campaign rules. As I understand it, I first need to roll for them to get anywhere. It was not completely clear from the rules whether I can start at Utstein or not, so I am going to roll and treat this as Turn 0. It is totally in character that they would fail to get where they aimed for and this roll covers their travel to the new land. 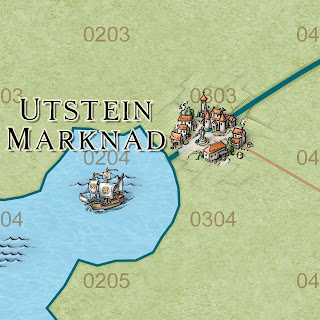 "I say we go this way," announced Sir Thiebault, "As an experienced adventurer, I have a nose for these things."

Sir Thiebault pointed directly inland from where they stood.

"With the greatest of respect, Sir Thiebault, I believe that we should head that way" declared Fulrad.

He pointed towards a thin trail of smoke on the horizon to their south. A narrow track led in that direction. As the group turned to look, they saw a lone traveller approaching.

The others looked doubtful. They were all too familiar with the carnage that attended random encounters in the wilderness. However, they were too late and Lysanthir was already marching off to meet the person approaching them.

As they got closer, details of the person's rather eccentric dress became clearer. They appeared to be clothed in a rainbow of offcuts from twenty different bolts of cloth. The fey nature of their features gave Lysanthir no pause at all.

"Greetings, traveller. We seek the nearest settlement. Our navigator dropped us off in the wrong place!"

"So I see. Worry not. Your journey will take you to the south, before it takes you further. Perhaps you would like to know more. I am Autolycus the Seer and I shall foretell the lie of the land for you if you will only gift me with a trinket or two that might entertain me."

Not hesitating, Lysanthir handed over a small quantity of silver from Onesipe's purse.

"Yes," muttered Autolycus the Seer, "I see that your presence in this land has already started great wheels in motion. You will find riches beyond your dreams and danger beyond measure, but I foretell that the danger will not be greater than the riches. This is my prophecy and I confirm it is true."

Autolycus walked off as Lysanthir stood there with his mouth open at the thought of all that wealth. His eyes were lit up like gold coins and the danger element had not registered with him at all. As the other's caught up they asked him what had happened.

"Gold," he said, "Gold. The Seer said we would find treasure beyond measure. Follow me now."

He set off down the track in the direction that Fulrad had suggested and the others followed because they had little choice unless they were all going to split up and go their separate directions. Before the day was out, they reached the small hamlet of Utstein Marknad. Currently it was not so small though. Asking around, they were informed that once a month, Utstein hosted the biggest market in the area. Possibly the only market in the area, but still the biggest.

The Thrappled Lemmings headed straight for the pub. After all, that was where you could find out what was going on in the area, and they would find out information that could guide them to this treasure.

So, that was the Confusing Trickster encounter. It has the effect of averaging Threat Levels. In this case, the only result is that the Orc Threat Level drops by 1 point to 5. At least they have made it to a settlement so the group can dig in and try to decide what to do next.