A Walk in the Light Green 2: Save the Elephants (Warfighter in Africa)

This Warfighter campaign uses the Warfighter Modern Australian pack as the player side and African Warlords packs 1 and 2 for the adversaries and missions. This is the second game in the campaign. Click here to read the previous game.

2nd Lieutenant Gray had blown up the holdout and obtained crucial information about the poachers' activities. The problem with doing a good job, he mused, was that it only led to more and harder work. At least this time it was worthy work though. He had recovered intel that pointed to the next poaching raid.

"Take Singh and Harper with you," his CO announced at the briefing, "then give those damn poachers a kicking."

Their orders were to patrol through farmland to the site of the anticipated attack and to eliminate all hostiles encountered. Singh and Harper looked delighted to be getting a walk in the hot sun but neither said anything. They did not need to, given the looks on their faces.

As the team approached the start of the mission area, they spotted enemy gunmen ahead. Singh closed on them quickly, killing one and taking the other out. Harper and Gray followed up, and Harper finished off the gunment. Gray sprayed fire towards an enemy patrol ahead, but not enough to completely keep their heads down. Harper got tagged by a shot. Just a flesh wound but enough to slow him down. 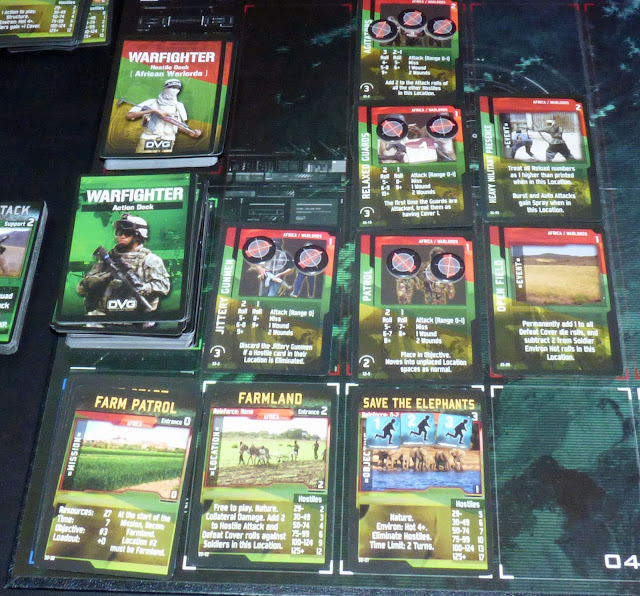 The three soldiers pushed forward fast to the objective, giving the patrol no chance to fire again. The objective area was a flat field near a drinking hole. Poachers were loafing nearby smoking and chatting, while another group of poachers were trying to rile them up and get them to focus on the ivory they were meant to be collecting.

The team opened fire. There were no rules here and they could freely hose the enemy down. The patrol went down to rapid fire. The relaxing guards quickly followed courtesy of a well-placed grenade. The remaining hostiles were mainly encouraged to get their heads down, only managing to fire a few shots that caused Singh to duck into what little cover there was while Harper sweated in the midday sun and struggled to keep up. Gray pushed the two soldiers on just the same.

A final couple of bursts of fire from the team sorted the remaining poachers and the team were done. These elephants would live to drink from this watering hole another day.

I've played this objective a few times and always found it difficult to win when playing low points count missions. I was seriously helped by drawing the Heavy Military Presence event which means that you can score multiple hits with burst and full auto fire. Normally, you need a weapon that has spray fire or grenades and claymores to score multiple hits. The down side to this card is that you run out of ammo faster. Fortunately, I drew Reload cards and cards that gave the team extra firing actions before we went in, so it was simpler than usual. Heat did not prove to be an issue, although it did cost me an action, but the action card draws made up for that too. All in all, the lads done good and will be rewarded by being given a more difficult job next time around.

+3 Mission Points. I bought Gray Explosives skill so that his grenade and claymore usage is more effective in future.

Mission Adjustment: Skills cost +1 point. It's going to be more expensive to buy new skills for Gray, but I was going to have to save up anyway now that I have the cheapest skills I was really interested in.

The -1 loadout adjustment still applies from before too. The accumulating mission adjustments make the game a bit more difficult while the skills that the player soldier gains make it easier. Depending how you roll, it could be a lot more difficult or just a bit. I would not like to play this objective with its time limit on clearing the area if I had rolled increases in number of hostiles in the zone.

As a final bonus, I think I managed to remember all the rules properly this time around!